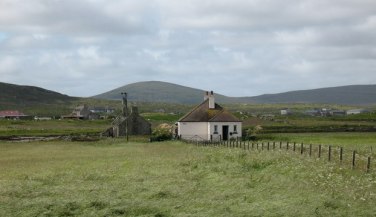 I was twelve the first time Da let me stay up for the bells, and that was the year Grandad died and left him the cottage by the sea in Applecross, so we had Hogmanay up there, just him and me and Katie. It was half a day’s drive from Glasgow and Katie drank most of a bottle of Cava on the way. Somewhere around Glencoe, while Katie was pishing in the dark at the side of the road, Da leaned over the seat rest and gave me a telling off for letting her get drunk, like it was my fault somehow. He had met Katie at work. I didn’t think much of her the first time she came around. She seemed too old for one thing, and she was trying too hard, but once she relaxed she was sound enough and I was never going to have that much to do with her in any case. I think she’d started to sober up again by the time we got to the cottage. It was December 30th: New Year’s Eve Eve.

The next day he took me to meet the neighbour. There were three cottages sitting in a little triangle on the machair. Ours was one, another was empty, and the third belonged to an obese old man named Ken McLean. His place smelt of peat smoke and also of the two arthritic German Shepherds that slept by the fire. Ken made us a cup of strong tea and he and Da talked while I looked around his kitchen. He had black and white pictures on the wall: old fishwives and crofters in tweed. I noticed that when Ken and Da weren’t talking, in the long silences, Da wrung his hands, like he was nervous. I’d never seen him do that. Afterwards, Da told me that he had been coming to stay in the cottage since he was a boy, and that Ken McLean had been living there even then. “He’s always been old,” Da said.

The snow fell. By five to midnight, Katie was drunk, I was bored and Da was pacing. He’d been drinking malt out of a tumbler, giving me lemonade. Then, just before the bells, he came over to me and said, “Right, you’re going to be McLean’s first foot.”

There was a lot I didn’t understand, aged twelve, about tradition, about ritual. I didn’t know the importance in the grown-up world of being able to clear away all the tired old crap of the past and start clean. I’d had no experience of needing that. And I grew up in a world without superstition; the idea of ‘bringing luck’ made as little sense to me as might ‘bringing rain’ or ‘bringing a good harvest’. Like with so much else, I did what I was told, went out into the dark and snow with a dish of stew in one hand and a bottle of Laphroaig in the other, and a lump of peat in my pocket, ready to hang the whole experience on a peg marked ‘it’s just something people do’.

McLean’s light was on so I waited until I was sure the hour had turned and chapped his door. The response was strained, thin: “Just come in.”

I found the door unlocked, and I stepped through into an intense heat; my eyes turned dry as I crossed the threshold. The fire was piled high. McLean was lying on top of the dinner table, on his back, feet flat, knees in the air. His breath was a rapid pant: wheezing in, moaning out. The two German Shepherds crouched beneath the table, dribbling into the shagpile. I stopped inside the door, unsure of myself. It’s just something people do.

“Put the peat on the fire and the whisky and stew on the floor.”

I couldn’t get near the fire, the heat was so intense, but threw the lump of peat into the hearth from a comfortable distance and edged towards the table and McLean.

His face was the colour of granite. He sighed as I placed the bottle and the casserole dish on the floor, then turned limp. His skin went from grey to blue. I was certain he had died.

By my feet, the dogs started to pant and wag their tails. I leaned over the table and put my face alongside McLean’s, like I’d seen folk do on TV, checking for breath. A wet stain, a pink diamond, had appeared in the centre of McLean’s shirt front, and it grew until it spanned from his neck to his belly, and I noticed that he hadn’t buttoned his shirt, or that he had unbuttoned it, and that something was emerging from a wound in his chest and through the open seam.

It was a tiny human hand, wet and red, grasping. Another came out beside it, and they reached out of and over the body’s open ribcage and took a grip on the table edge.

A small, thin, bloody child–a boy–dragged himself out of McLean’s chest cavity and fell on the floor with a wet thlump. The dogs licked him clean.

Just something people do.

Da told me later that I’d done everything I was supposed to. I couldn’t see that I’d done anything at all, except manage not to be sick. As I left the cottage, the child picked up the bottle of whisky and doused himelf – the air filling up with that phenolic hospital smell – and then started to shovel the stew into his mouth with his hands while the dogs set about devouring old McLean’s carcass.

Da greeted me at the door of our cottage – I was his first foot too – and he gave me a hug, said Happy New Year and let me have a glass of whisky. I didn’t feel like drinking it, but forced it down, and we danced – the three of us – to the music on the radio until early in the morning. We left after lunch on New Year’s Day and the boy next door came out to wave us off, the two German Shepherds leaping and tussling beside him in the snow.

Torn to Rags in Wordland

I am a Scottish writer of horror, dark fantasy, weird and supernatural fiction. My stories have appeared in various anthologies, including Sensorama, Strange Tales V, and Caledonia Dreamin'. (Find me on Twitter @davidmcgroarty)